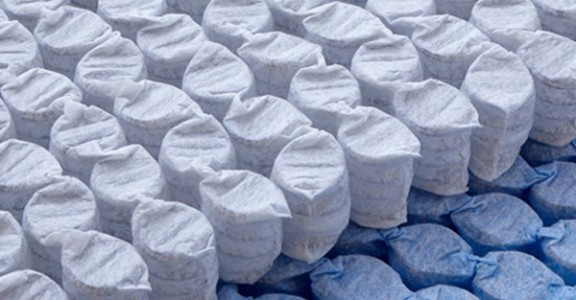 Q. Whats up with all those different kinds of mattress springs? Isn’t a spring a spring?

A. Well, sort of but not – here are mattress springs explained:

Mattress coils, also known as mattress springs, are coil springs used in a mattress. Coils are primarily used in the core (support layer) of innerspring mattresses, which is their original use. In recent years small “micro-coils” have started being used in the upholstery (comfort layer) of mattresses, primarily with a coil core (“coil-on-coil” construction), but sometimes with other core types.

Mattress coils were introduced in the mid-late 19th century, and remain popular in the 21st century, particularly in the United States.

There are four types of mattress coils. A key desiderata is “response range”, meaning the change in firmness as the spring is compressed – initially soft, to conform to the body, then hard, to provide support. In increasing order of response range and cost, the types are:

While coil springs were invented in the 15th century, they were not used in mattresses until the mid-late 19th century, following the use of upholstery coil springs in furniture and carriages.

Microcoils were introduced in the early 21st century, and as of 2014 are a small part of the market.

The bed coil spring was patented by Louis Andrew Vargha.

The mattress coil market is quite concentrated – the leading maker is Leggett & Platt (founded 1883) of Carthage, Missouri, and its coils are used by all major US mattress makers.  Other makers include HSM (formally Hickory Springs, founded 1944) of Hickory, North Carolina; Spinks Springs (founded 1840) ofLeeds, United Kingdom; and Subiñas (founded 1959) of Biscay, Spain.